My friends and I went camping on Assateague Island for my friend’s 21st birthday.

We camped in the State Park area, which was blooming with dune goldenrod (which is unusual), and teeming with people (as it is all season).

We strolled the beach as the setting sun tainted the cloud-filled sky with a hundred hues, roasted hotdogs over a smoky fire,

wrapped up in blankets and laid on the beach to star gaze and watch the moon rise orangely over the water, snored all night in the tent like a pile of cats, and woke up with the first bird calls to watch the sunrise on the beach.

It was cute and kind of funny, really, to see 4 little docile frames trotting through a half-asleep campground, nosing at shrubs and tendrils of grass as if they had just been let out to pasture for the day–as if they never even noticed the entourage of 9-year-olds on bikes behind them, or the sleep-disheveled lady on her way to the bathhouse who stopped and ran back to take their picture.

It was funny to see them nose into the doorway of a neighboring camper’s tent and rummage through the contents of a Styrofoam cooler which was too weak to withstand their practiced ransacking.

My friends laughed, and as a joke we took pictures of them in the  background as we settled down to our long-awaited breakfast, prepared to watch the saga continue to unfold.

And then they turned our way.

Noses down, steadily they came towards us, but we knew what was up. My friends and I gazed longingly at our half-eaten breakfasts on the table, knowing we had to follow park rules and give the ponies a 10-foot wake.

“Don’t worry, guys. I got this.” I boldly stated, and walked towards them commandingly, waving and clapping my hands.

Noses down, they steadily advanced past me, eyes zeroed in on our breakfast.

“Never mind. HIDE THE FOOD!” I screeched, desperately swooping up what I could reach. And then I leaned against the car and laughed.

One of my friends was grabbing the last cinnamon buns out of reach of the hungry jaws, one was taking pictures and one was literally wrestling a hot dog skewer out of a pony’s mouth.

With the innocence of a dove, Assateague’s native ponies had effortlessly taken over our picnic table, where a very pleasant breakfast HAD been taking place not 4 minutes prior. 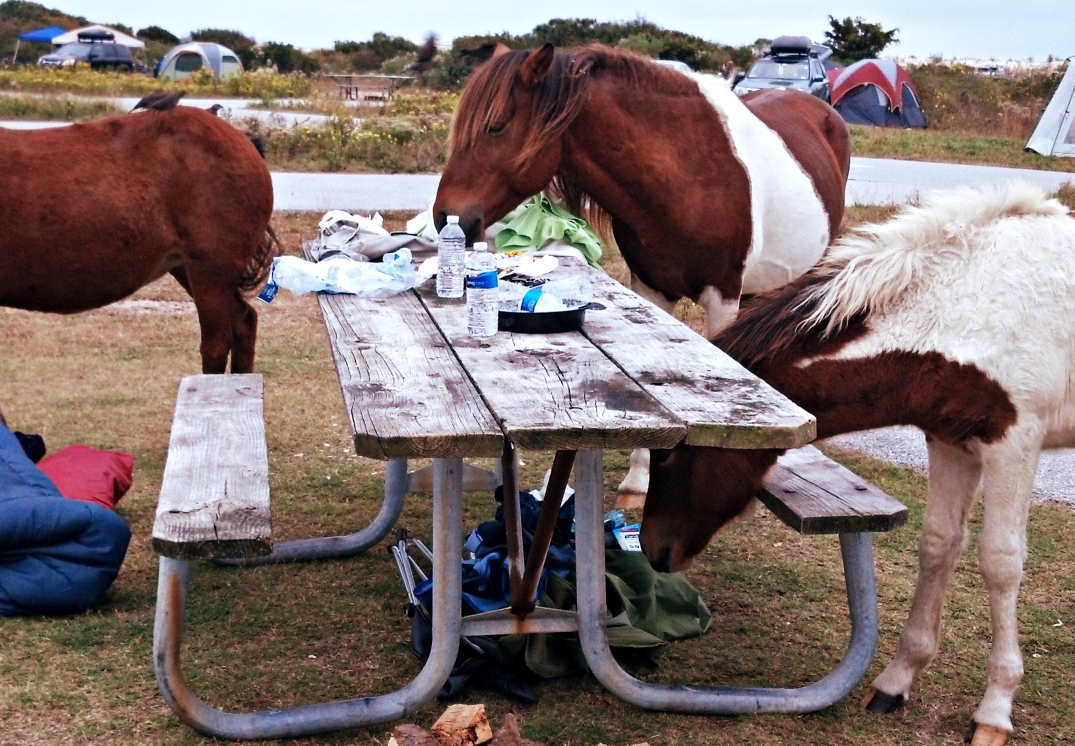 What goes around, comes around.” They say.

“Do to others what you would prefer them to do to you.” Those are Jesus’ words.

Both a good thing to remember at 8 a.m.

That is, if you value your breakfast.